In this section, we will address eight cultural variables: human nature, time, action, communication, space, power, individualism/collectivism, and competitiveness/cooperativeness.  These major variables offer a simple frame of reference for examining culture and understanding its major characteristics.

Cultures may also hold one of three beliefs pertaining to human nature. The first is the belief that people are basically “good”. In these cultures, people will generally believe that you can put the right person in the right position and empower him/ her to perform. The second belief is that people are basically “bad.” These types of cultures put an emphasis on control and monitoring of people. The final belief is that people are a mixture of “good” and “bad.” In these cultures, people believe personal development is possible, and investment in training and professional development is highly desirable.

In addition, we also see differences in terms of single-focused and multi-focused views of on how time is used and adhered to. Single-focused, also referred to monochronic, uses of time place high concentration on one task or issue and people are committed to schedules. Multiple-focused, or polychronic, uses of time emphasize on multiple tasks, with a priority on relationship building rather than on meeting deadlines.

Cultures, like individuals, can be oriented towards activity or passivity. The first type is a doing culture, where value is placed on action, accomplishments, achieving personal goals and improving one’s standard of living. These cultures follow external standards of measurement and are motivated by promotions, raises, bonuses and recognition.

Conversely, in being cultures, value is placed on working for the moment, release from stress, and experience rather than accomplishment. These cultures put emphasis on job satisfaction and are not motivated by promises of future rewards.

There are two variables that exist across cultures- high-context/low-context and formal/informal- that deal more directly with the way we send messages back and forth when we interact. The first variable pertains to how much meaning is conveyed through the context surrounding verbal communication. In low-context cultures, information is given primarily in words and meaning is expressed explicitly. In other words, you are expected to say what you mean and mean what you say. Conversely in high-context cultures, information is transmitted not just in words but also through a variety of contexts, such as voice tone, body language, facial expressions, eye contact, speech patterns, use of silence, past interactions, status, common friends, etc. Members of high-context cultures might not say something directly as they may assume other group members will understand the indirect meaning.

The second pertains to how important it is to formally or informally follow rules for self-presentation and for behavior in organizations and social situations. In formal-communication cultures, importance is given to following protocol and social customs. In informal-communication cultures, people feel more comfortable doing business in a more casual way without lots of rituals and ceremonies. 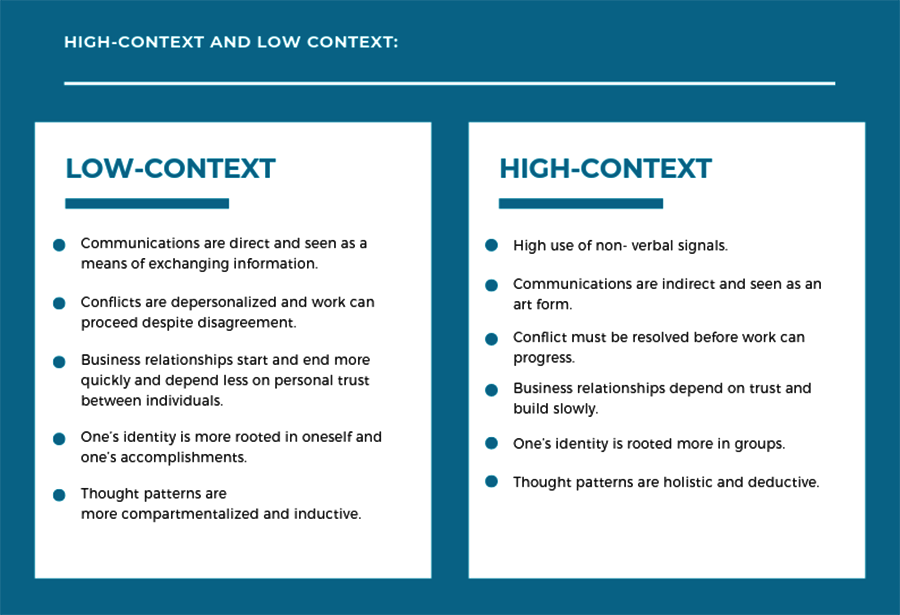 Cultures also differ in regard to how they perceive and use physical spaces, specifically private and public space. In private-space cultures, personal space is valued, and clear borders and boundaries exist between one space and another. Ownership of space is important. Doors are to be closed, and knocking before entering is expected. In public-space cultures, the boundaries between personal and public spaces are weaker and more flexible. Space is shared rather than owned. Doors are to be kept open, and access is free.

The power variable pertains to how much the less powerful members of a society expect and accept that power is distributed unequally. In high-power distance cultures, also referred to as hierarchy cultures, inequality is accepted. Structures are defined and differences in status are seen as normal. This type of culture satisfies a need for dependence and security. In professional settings, members of high-power distance cultures usually prefer groups where clear roles are assigned and there is a designated leader.

In low-power distance cultures, also referred to as equality cultures, inequality is thought to be unsatisfactory. While it may be unavoidable, it is considered correct to minimize it through legal, political, and economic means. In professional settings, members of low-power distance cultures do not accept that a manager has a given right to greater power and all member can participate in decision making.

Individualism and collectivism pertain to the extent to which countries elevate the role of the individual over the group. In individualistic cultures, the bonds between individual members are relatively loose. People are independent and expected to take care of themselves, or at most, the nuclear family. Guilt and fear of loss of self-respect are central to social control. The “I” predominates over the “We.” Individual identity is key, and speaking one’s mind is a sign of honesty. Individualist cultures emphasize individual expression and personal responsibility.

In collectivist cultures, individual interests are placed second to group interests. Groups protect their members in exchange for loyalty and obedience. Social control is based on the fear of losing face and the possibility of shame. Identity is therefore based on the social network to which a person belongs. Harmony, rather than speaking one’s mind, is a key value. Laws and rights differ from group to group, and political power is held by interest groups. 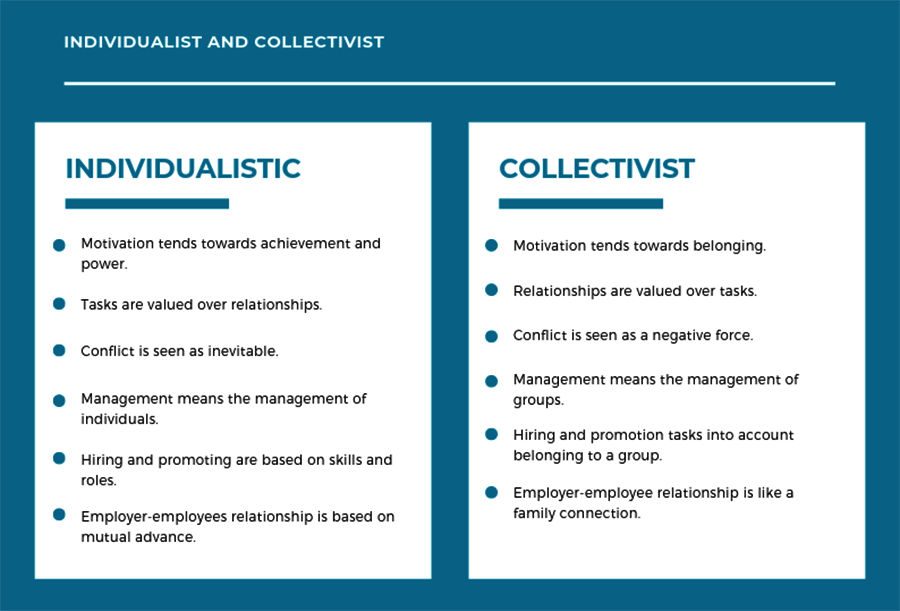 Competitiveness pertains to how much achievement and success dominate over caring for others and quality of life. In competitive cultures, achievement, assertiveness and competition are reinforced. In these cultures, social and gender roles also tend to be distinct. Men are expected to be assertive, tough, and driven by material success. Women, on the other hand, are expected to be modest, nurturing, and concerned mainly with the quality of life. When competitiveness is valued, the culture is predominantly materialistic, with an emphasis on assertiveness and acquisition of money, property, goods, etc. High value is placed on ambition, decisiveness, performance, speed and size.

Cooperativeness characterizes cultures in which social and gender roles overlap. Everyone is expected to demonstrate modesty, nurturing, and a concern for the quality of life. Being sympathetic to one’s fellow human beings is important with an emphasis on relationships. High value is placed on consensus and intuition. In a competitive culture, people live to work. In a cooperative culture, people work to live.