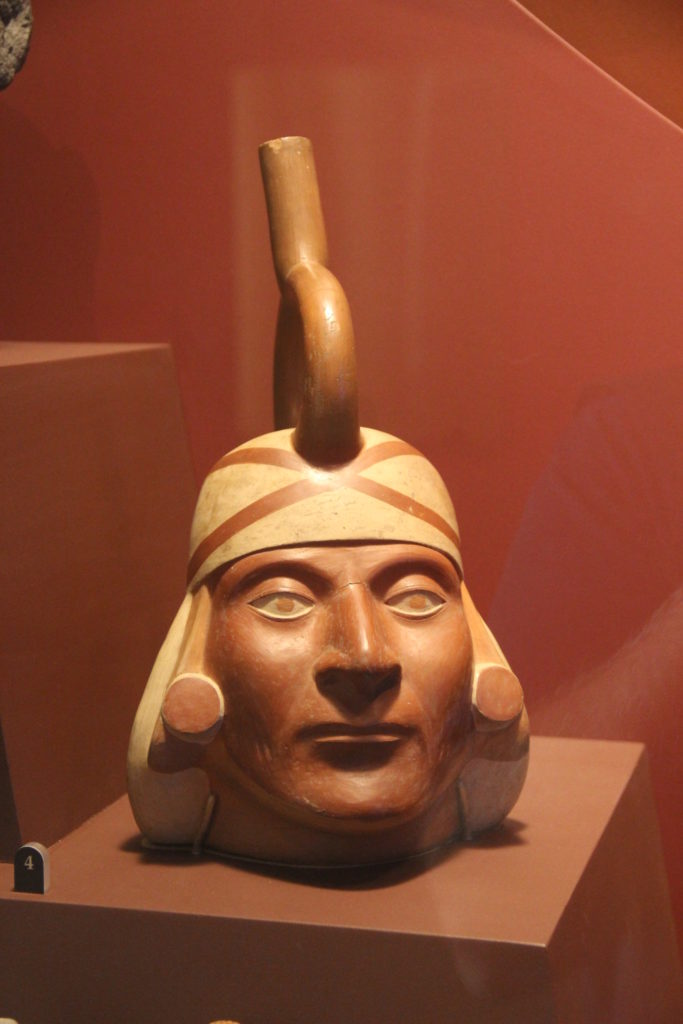 The waters off the west coast of Peru are some of the world’s richest fishing areas. The shore, however, is one of the world’s driest deserts as the cold air off the seawater inhibits rainfall on the shore. The rain doesn’t fall until it reaches the Andes, forming rivers flowing from the Andes through the desert. The entire coastline is marked by rivers. Much like the Hohokam of Arizona, without canal irrigation, agriculture would be impossible here. The Moche Culture (ca. AD 150–AD 700) consisted of several political centers located along these Peruvian waterways. Like the Mississippians, Southwest cultures, and the Maya, the Moche were reliant on maize, coupled with other native domesticates like potatoes, peanuts, and peppers. They also hunted marine mammals. The Moche are most known, however, for their fantastic artwork, elaborate elite burials, and ritual theater.

The site of Cerro Blanco, also called the Moché site, is located along the Peruvian coast in the Moche River Valley. The Moche Valley where the site is located is thought by some to have controlled other centers along the coast of Peru. The site of Cerro Blanco is dominated by two major “pyramids”—the Huaca del Sol (130 ft) and the Huaca de la Luna (100 ft). A huaca (wak’a) is a revered monument or object in the native language of Quechua. Between the two pyramids is a large plaza. Huaca del Sol was a solid adobe, built of more than 130 million bricks. Laborers might have been conscripted to build these pyramids from neighboring valleys. Archaeologist Michael Mosley has found more than 100 different maker’s marks impressed into the adobe bricks and has made a case that these symbols represent the makers of different workshops, much like marks on the bottoms of modern-day pottery. Different sections of pyramids were made of bricks with different symbols, suggesting different groups of laborers worked these different sections. 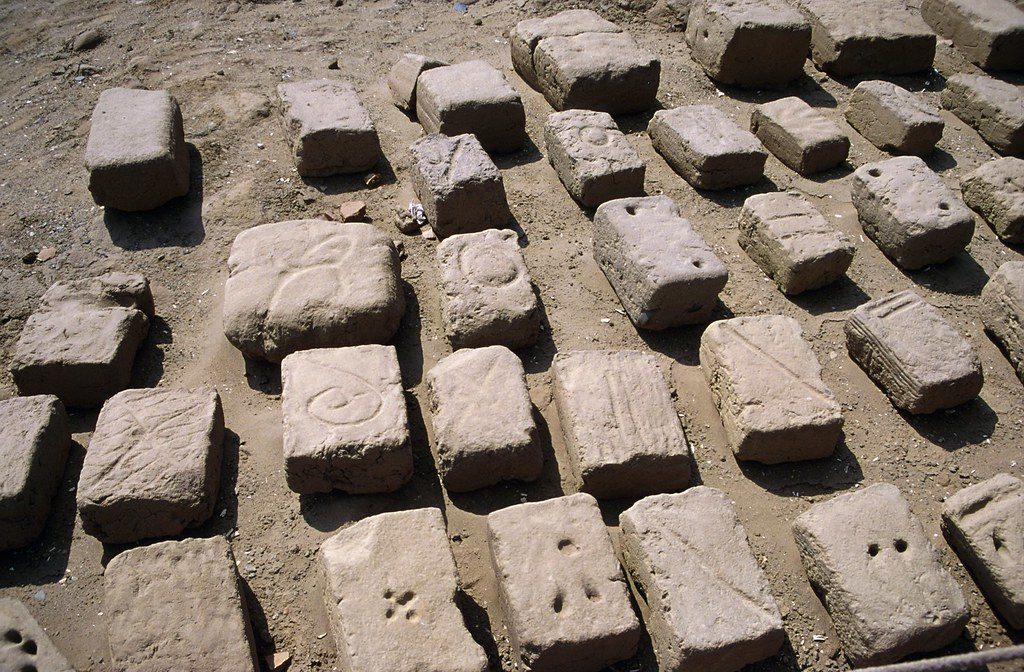 The Spanish destroyed the western portion of Huaca del Sol when they diverted the Moche river to
hydraulically mine Huaca del Sol for its rich tombs. Today, less than half the monument remains. Huaca Sol was likely used as both the chief’s residence and mausoleum for important leaders. Across the plaza, Huaca de la Luna is a complex of three platforms surrounded by high adobe walls. Painted murals have been discovered on the Huaca de la Luna depicting warfare and decapitation.

Moché pottery, like Mimbres pottery, is world famous for its craftsmanship and naturalistic depictions. Unfortunately, just like Mimbres pottery, it has been the target of looters which continues to this day. Moché pots from Peru, in contrast to those of the Southwest, were made using pottery molds. A master artisan would create the mold matrix, the original sculpture. Clay would be added to the exterior to create the mold, which once dry was fired. Clay was then added to the interior of the two halves of the mold, making replicas of the original mold matrix. In this way, exact copies of the original work could be made. Not surprisingly, pottery was produced in workshops by craft specialists.

One common pottery form is the stirrup-spout vessel, which was likely used for pouring liquids. Moché portrait vessels are often stirrup-spout vessels that depict actual people—almost certainly Moche warriors. Archaeologist Christopher Donnan has done an extensive study of Moche portrait vessels and found that individual men can be identified through distinguishing marks like scars and headdresses. These men are depicted throughout their lives, from childhood to adulthood. You can see how the mold matrix would be a useful technology for depicting individuals throughout their lifetime. The matrix could be used over and over again with slight adjustments made for aging.

On some of the vessels, there are references to coca. Coca is a native plant containing the alkaloid
cocaine. It is traditionally chewed or used in tea as a stimulant or pain reliever. On some Moche pots, vessels for coca are depicted or leaves being chewed in the mouth. It is thought coca was important in warfare to maintain alertness and vitality. Some of the vessels show warriors on the losing end of the battle—naked and bound awaiting sacrifice.

Elaborate battles are frequently depicted on Moche pottery. In one famous example, called the Luhrsen Vessel, the battle ensues between pairs of elaborately dressed warriors. Naked men with ropes around their necks are depicted as well. Other Moche vessels depict characters in a sacrifice ritual, including a Warrior Priest, an Owl Priest, and a Priestess. The Warrior Priests drinks from a goblet while captives have their throats slit by people holding small cups. It was originally thought that these images represented purely mythological events as there was little material evidence to indicate this type of ritualized warfare. Later discoveries at Sipán, San Jose de Morro, and Cerro Blanco, indicate that these images were depicting, real people and actual events. The Lord of Sipán, as he is called, represents the Warrior Priest. A total of 451 gold, silver, copper, textile, and feather objects were buried with him. Groups of sacrificial victims, horribly mutilated and encased in clayey mud, have been found in the plaza area between the two principal huacas at the site of Moche (Cerro Blanco). Statuettes representing captives, with ropes around their necks and penises, have also been discovered in association with these skeletons. These finds indicate that the images on Moche pots and murals represent real practices and not purely mythological events.

It is thought that Moche nobility engaged in ritualized warfare—with the losers stripped of their clothes and sacrificed. Blood from the victims was consumed by priests and the victims are subsequently dismembered. Today, ritual warfare occurs between villages in the Andes, but while violent this stops short of death.

The warrior culture of the Moché is not so unusual and can be seen again and again throughout history. Certainly, Teotihuacan in Mexico glorified the warrior, particularly in the Temple of the Feathered Serpent. Late Bronze Age Europe (1300–800 B.C.) also had a distinct warrior theme, where men gained status through their exploits. Huge numbers of weapons, especially battle axes, were in circulation, and depictions of warriors in their regalia abound. The macho-ness of the Bronze-age warrior is captured in Homer’s Illiad.

Moche society was hierarchical with apparent inheritance of wealth and power. Marked disparities in burials and residences occur, that is, burial and residential hierarchy. Burials near the huacas are more lavish, and some residences are more solidly built than others. These more elaborate residences also contained valuable objects such as copper implements and stirrup-spout vessels, thought to be used for drinking chicha, or corn beer.

Around AD 600, the beginning of the Moche collapse, an extreme El Niño (mega-El Niño) event occurred on the coast. Flood waters damaged Moche constructions during this time. The rains also explain the sacrificial victims encased in the mud at the site of Cerro Blanco. Ice cores and sediments indicate that a severe drought followed the mega-El Niño event on the coast. This climatic oscillation from wet to dry could have greatly weakened the Moche culture. Not only would people have suffered from environmental devastation, but they might have lost faith in the elite ideology. In the 600s, the large ceremonial centers are abandoned. The Moche began building fortified sites on defensive locations on high ground. Piles of sling stones indicate warfare—likely among the Moche themselves.